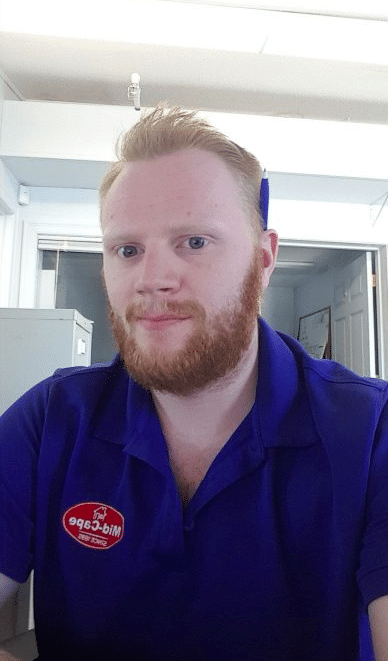 What is your role at Mid-Cape? I’m a purchasing assistant / analyst, trying to learn as much as I can from Mike, Jim, Bruce and Ronda.

What led you to a career with Mid-Cape? I graduated from Bridgewater State with a degree in Operations and Supply Chain Management in 2016, but hadn’t really had an opportunity to use it. I met Barb at a career fair in Hyannis and learned about the management training program. At that point I had applied for dozens of other jobs and had received a few offers, but when I interviewed and met the team here, I decided that hands down this was where I wanted to work.

What is your biggest accomplishment at Mid-Cape so far? Honestly, my biggest accomplishment so far has simply been getting offered my current position. It was really nice to feel that I’d proven myself worthy enough to be given a more permanent spot in the company and it feels great to finally have a role that puts the skills I learned in college to good use.

What is something working at Mid-Cape has taught you? Working at Mid-Cape has taught me to learn as much as I can from everyone and to not be afraid to ask questions. When I started 8 months ago, I didn’t know much more than what a 2×4 was. Trying to grasp enough knowledge of an entirely new industry was daunting at first, but thanks to everyone who I’ve worked with, I think I’m starting to get the hang of it.

So far, what has been your favorite memory at Mid-Cape? I filled in for Paul Bohannon in Contractor Sales for about 6 weeks in Wellfleet, and I got to work with a contractor from the take-off through framing, including a custom fabricated floor hatch. It was really cool to establish that relationship and to watch all of the pieces come together, and I got to learn a lot from Jayne while I was up there!

What’s the greatest bit of advice a Mid-Cape team member has ever given you? You’re going to make mistakes, and every mistake you make has already been made before by someone here. Fix it, learn from it, don’t do it again and move on.

What is one important skill every person should have? Empathy- Being able to understand where someone else is coming from and being able to anticipate how your actions may affect those around you. I believe that this is key to establishing relationships- with co-workers, customers, vendors, everyone.

What is one of the things on your bucket list? Way too many things on the list, but if I had to pick just one, it would be riding the California Zephyr train from Chicago to San Francisco through the Rockies and Sierra Nevada. That or to go to Monaco for the Grand Prix.