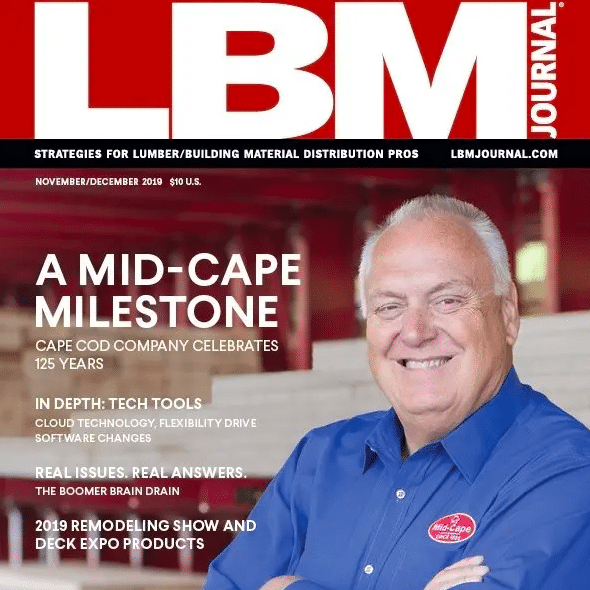 There’s a birthday party on the Cape next year, and it’s a big one. Mid-Cape Home Centers is turning 125. Headquartered in South Dennis, Mass.—essentially the center of Cape Cod, hence the name—Mid-Cape was founded in 1895. There have been a number of different locations throughout the years, all focused on Cape Cod and the surrounding region in Southeast Massachusetts. Currently, Mid-Cape operates six locations made up of five full- line lumberyards and a Martha’s Vineyard showroom. Its newest location is also one of the oldest in the area. In April 2019, Mid-Cape acquired fellow century-old lumberyard, Wood Lumber Company, of Falmouth, Mass.

Mid-Cape stores range from big to small. Its one off-cape location in Middleboro, Mass., is 25 minutes from Cape Cod and serves the South Shore area, and includes recent investments such as new warehouses and racking, new delivery trucks, and a brand-new showroom.

At the other end of the spectrum is the Wellfleet store, which Stevenson describes as “out of a novel.” The small, quaint store is right on the water, and occasionally staff has to move inventory around to protect it from high tide.

Together, the stores represent what Stevenson says is a Cape Cod tradition of hard work and quality products.

“It’s a reflection of old school craftsmanship,” he says. “People here just expect quality and the tradesmen expect quality because it’s expected of them.”

Located on the destination of Cape Cod, much of the clientele Mid-Cape’s customers serve are affluent and demand quality. Stevenson says there are 50 to 75-year-old homes sold for a million dollars only to be torn down for rebuilds.

More than 80% of Mid-Cape’s customers are professional contractors, an area that Stevenson says has seen growth over the past five years.

Although the customers are primarily professional builders and remodelers, Mid-Cape’s showrooms cater to homeowners as well, he adds. Particularly during the summer months, when tourist traffic is increased on the Cape, local homeowners appreciate the design showrooms at Mid-Cape locations. “We love taking care of our summer business. We make it easy to not have to fight the vacation traffic,” Stevenson says.

More than 250 employees serve customers year-round at Mid-Cape’s six locations. While one might expect that the yards are particularly busy during tourist season, Stevenson says it’s actually quite the opposite.

“Some of the communities around here don’t allow you to start a house after the 4th of July,” he says. “Others don’t permit building during peak tourist season, so we’re unusual in that summer time becomes a bit of a lull.”

For Mid-Cape, serving the community goes beyond selling building materials. If you see a Mid-Cape truck hauling supplies, you’ll know just how committed they are to the needs of the area. The company’s Truck-for-a-Cause program features truck wraps to drive awareness and honor local causes. The first truck was wrapped for an area autism organization. More recently, a truck wrap, along with a company-wide fundraiser, focuses support for a local veterans outreach center. Mid-Cape management surveyed staff when determining which groups to support.

“It’s an extremely proud campaign for the organization,” Stevenson says. “We’ve got a high percentage of veterans on our staff and I’m glad we are supporting that. It’s truly about the people.”

Mid-Cape had been owned by one family for many years, Stevenson says. But eight years ago, a local businessman by the name of Jeff Plank bought the company, leading to what Stevenson described as a “rebirth.”

“He’s much more aggressive in his vision for the company and in giving back to local communities and investing back in the business,” Stevenson says. “Every year we’ve got one or two major projects going on to put back into the company.”

As a result, Stevenson says, Mid-Cape is performing well while growing and evolving each year.

“It’s all about the customer and about the Mid-Cape teammates,” he says. “Jeff and I both believe that everything you do to invest in the business today pays dividends in the future. We believe in our plan and we view more long term than short term.”

As Stevenson forecasts the next five to 10 years for the LBM distribution industry in his part of the country, he thinks first of the longtime team members he has on staff. Replacing their knowledge and experience will be increasingly important in the coming years.

“We don’t have a lot of people who are 40-45 years old who are here,” he says. And that is reflected in the industry as a whole, as many career-minded LBM pros who left during the Great Recession have not returned to the industry.

“There are some great young people here, and we’re doing our best to recruit them. Our HR department does a nice job of networking through our local builders groups.” Mid-Cape also engages youth through a networking program in the local high schools, as well as recruits at trade schools and construction training programs.

The company has recently reinvested in its in-house talent development program, leading a focused effort in customizing training to specific departments and teams.

“We’ve made it more accessible, more frequent, and role-specific than we’ve done in the past,” Stevenson said.

Do the right thing

Several years ago, Mid-Cape developed a written core values statement that is now practiced throughout the company. Stevenson says one of the mainstays of that statement is just four words that help guide the company forward: Do the right thing.

“Do the right thing and do it right the first time, means we always strive to treat the customer with respect along the way. The same goes with our employees. We act above board with everything we’re doing. If we do the right thing day in and day out, we’ll be just fine. It sounds cliché, but if we keep listening to our customers, we’ll keep growing and evolving. I fully believe that.”

Article written by LBM Journal. Thank you for the feature.